Srinagar: “We all have dreams. But in order to make dreams come into reality, it takes an awful lot of determination, dedication, self-discipline and effort”.

Adil, who started his cycle journey from City Center, Ghanta Ghar, Lal Chowk from 7:30 am on March 22 after being flagged off by Divisional Commissioner, Kashmir Pandurang K Pole, completed the distance in eight days, 1 hour and 39 minutes by reaching the destination on March 30 at 7:30 am. 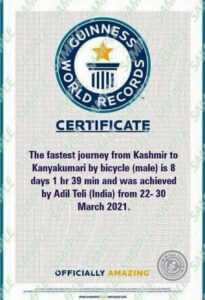 Speaking about his remarkable record, the young cyclist said that it was not an easy task and involved lot of training besides several health issues also make it a difficult task. “On March 22, I started my journey of dreams with the active support of divisional administration. That day it was raining all day from Srinagar upto Punjab and made my journey very difficult” an emotional Adil said.

The young Cyclist faced several health issues during the entire journey but his determination made it easier for him. “I faced several issues during this travel. After the 7th day of my journey, my body started to show signs of weakness. My knees started to swell with extreme pain making it difficult to pedal but I only kept the goal of beating Guinness world record in my mind”, Adil said.

The Cyclist praised the J&K Administration for their timely support for embarking on this prestigious journey. “I am grateful to J&K Administration for their timely support especially the divisional commissioner, Kashmir, who arranged to let him to travel through the then under construction Banihal-Qazigund Tunnel for this journey. He adds that the administration also provided him help on the risky and landslide prone areas of Srinagar-Jammu highway during the travel.

Further talking about how cycling became his passion, Adil said, “From 2014, I starting representing Jammu and Kashmir at the national level continuously and this amplified my interest in cycling”, Aadil says. He adds that the 2019 cycling expedition from Srinagar to Leh made him passionate about cycling and motivated him to realize his capabilities in the cycling.

Talking about his preparation for this journey, he young cyclist says that the Srinagar-Leh cycling expedition motivated him that he can beat the Guinness Book of World Record for the fastest Kashmir to Kanyakumari journey on cycle. “The Srinagar-Leh cycling journey changed my way of cycling and I got more passionate about this sport. It motivated me to beat the Guinness World Record”, Adil says. He adds that I planned for this journey for almost a year and went outside J&K for training for six months. “During six months training, I used to do cycling of 600 to 700 kms per week and after that I applied for Guinness World Record in November 2020 and it was accepted in February 2021”.

Talking about his family’s support in realizing his dreams, Adil said, “My parents have been my inspiration and they have supported me through out. He adds that his mother has been his motivating factor for achieving this feat.