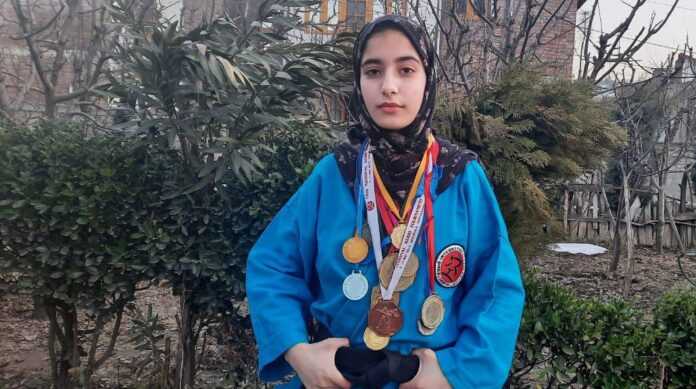 Srinagar: Known as the Karate girl in her village, Pakeeza Qureshi a girl from North Kashmir has won three gold medals at the national level so far.

Pakeeza,14, a resident of Handwara town in Kupwara district is famous for her expertise in martial art.

Pakeeza while talking to news agency—Kashmir News Observer (KNO) said that she was interested in athletes since her childhood and used to take part in every competition.

In order to pursue her inborn athlete dream, in 2018, she joined the Olympian classes for mixed martial arts where she learnt several things including self-defence after which she participated in the first district-level championship.

In her maiden competition at the district level, she bagged a gold medal and secured a spot in the state-level championship. After winning gold in the state championship, Pakeeza got a chance in nationals.

“In my first national championship, I managed to get a bronze medal, however, later in Hyderabad nationals, I got two more gold medals,” she said.

Pakeeza said that her family has been supportive from day one and they are very happy that she is now a black belt. She also thanked her coach Faisal Nazir for his support and guidance.

Pakeeza claims that in 2019, she was also selected for Dubai Internationals, however, she couldn’t participate due to some financial issues.

“With rape and molestation cases increasing all over the world, there is a need that every girl should learn self-defence to save herself from any odd situation,” she said.

Desire to become a professional player in a martial art, Pakeeza also has an interest in painting, yoga and photography.

“To keep ourselves fit and healthy and to remain away from drugs, there is a need to take part in sports activities,” she said—(KNO)