Pertinently, Indian flying fox is a species of megabat found in the Indian subcontinent sources told the news agency—Kashmir News Observer (KNO) that the Indian large flying fox was captured by Wildlife control room Devsar in Sangas Karwat village of Kulgam on Monday.

A large number of people rushed to the spot and clicked pictures of the mammal. 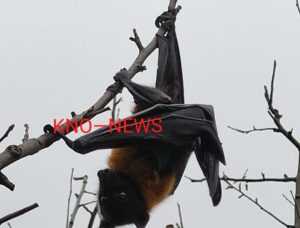 Wildlife Warden, South Division, Abdul Rouf Zargar told KNO that they would release the mammal into the orchard after a medical checkup because it was in a injured condition (head injury), adding that it forays into villages to eat fruits.

Wildlife Warden, Wetlands, Ifshan Dewan told KNO  “We have to dispel myths associated with large flying fox (bats), like they being considered ‘ill omens,’. Bats are also territorial in nature, and so do not like their space being invaded,” she said, adding that it is nocturnal and eat mainly fruits—(KNO)

Militants give slip to forces in Shopian gunfight, 3 soldiers injured...

Encounter breaks out in Shopian

Jammu and Kashmir: Weather forecast for next 24 hours