Srinagar: Jammu and Kashmir Bank (J&K  Bank) has suspended one of its woman employees over alleged “derogatory” remarks on the death of Chief of Defence Staff Bipin Rawat.

An order in this regard reads that “despite repeated circulars issued from time to time against misuse of social media platforms by employees contrary to interests/rules of the Bank, in one such incident one of our employees has made derogatory comments/remarks on the social media platform on to tragic accident.”

“The contents are purely defamatory and not in consonance with conduct rules governing the services of an employee and tantamount to misconduct”, the order, a copy of which is in possession of GNS, reads. 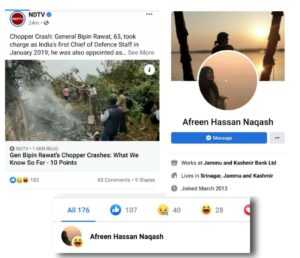 “Pending disciplinary proceedings against the Banking Attendant, Code No 023581, presently posted at Central Processing Centre CASA, she is hereby placed under Suspension with immediate effect”, the order concluded.

The suspension order has been ordered purportedly over an emoji, the employee made on news shared by a news channel on Facebook page, on the copter crash occurring on Wednesday. (GNS)

’CRPF Trooper Hangs Self to Death in Humhama’

Attack on CRPF bunker in Anantnag, no injuries reported

Not missing in Ramban, 3 members of Lucknow family murdered in...