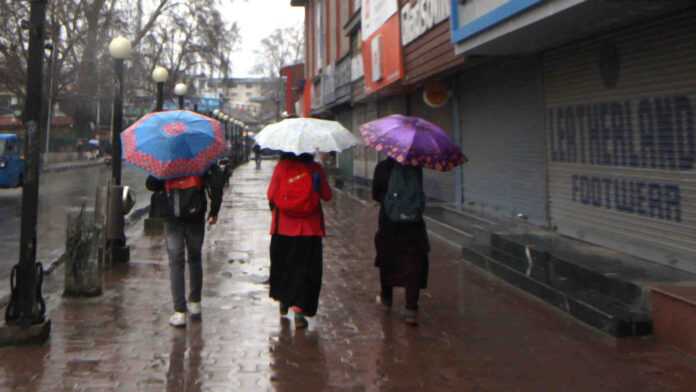 Srinagar: Weatherman on Monday forecast light to moderate rains from Tuesday afternoon to Thursday forenoon and advised farmers to suspend chemical sprays and irrigation operations in orchards and fields in view of the approaching weather system.

“As of now, feeble (Western Disturbance is) most likely to affect J&K and adjoining areas from April 12 (afternoon) to April 14 (forenoon),” a meteorological department official here said in a statement to GNS. “Under the influence of this system, light to moderate rain with thunder and gusty winds (are) most likely to occur during night of 12 April (night) to 13 April (forenoon) over scattered to fairly widespread places of J&K and thereafter light rain over isolated places likely to occur till 14th April (forenoon).”

The system, he said, will most likely to concentrate over most of the stations of Kashmir Division and few stations of Jammu Division.

He said there are chances of thunderstorm and lightning accompanied with gusty winds at isolated places of both the Divisions during April 12 (night).

“Farmers are advised to suspend chemical sprays and irrigation operations in orchards and fields during the above period.”

Meanwhile night temperature recorded increase in Jammu and Kashmir except Srinagar and some parts of Jammu division on Monday.

The meteorological department official told GNS that Srinagar recorded a low of 9.9°C against 10.0°C on the previous night. The temperature, he said, was 2.3°C above normal during this time of the year for the summer capital.

Qazigund recorded a low of 7.8°C against 7.2°C on the previous night. The temperature was above normal by 1.3°C for the gateway town of Kashmir, he said.

Kokernag, also in south Kashmir, recorded a low of 9.7°C against 8.8°C the previous night. It was 3.6°C more than normal during this time of the season for the place, the official said.

Pahalgam, the famous resort in south Kashmir, recorded a low of 3.7°C against 2.6°C on the last night. The temperature was 0.9°C above normal for the place, he said.

Kupwara town in north Kashmir recorded a low of 6.3°C against 6.1°C on the previous night. The temperature was normal for the place, the official told Global News Service.

Jammu recorded a low of 22.9°C against 21.7°C on the previous night, the official said. The temperature was 3.7°C above normal for J&K’s winter capital, he said.

Banihal recorded a low of 12.2°C, Batote 14.5°C and Bhaderwah 10.8°C, the official said. All these places recorded a slight drop than previous night.