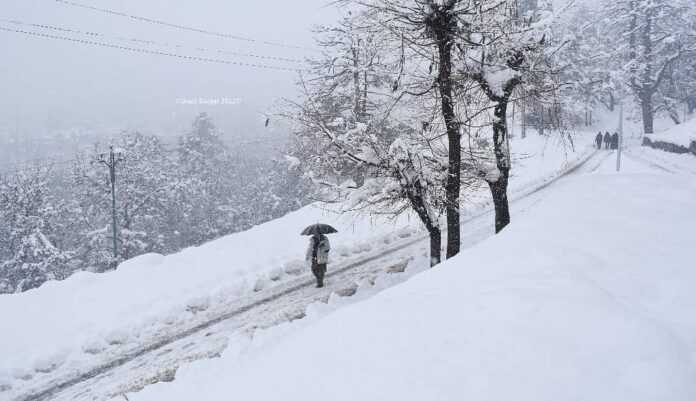 Srinagar: Weatherman on Thursday revised its earlier forecast by now predicting widespread moderate rain and snow during 22 to 23rd January in Jammu and Kashmir.

“An Active Western Disturbance is Most likely to cause Widespread Moderate Rain/Snow in J&K during 22-23rd Jan,” an official of the meteorological department here told GNS, adding, that the weather system may temporary cause disruptions in surface and air transportation. “(Probability of Occurrence as of today is 75%),” he said.

A meteorological department official here told GNS that Srinagar received 2.9mm rain in last 24 hours till 0830 hours today while the summer capital of the J&K recorded a low of 2.2°C against last night’s 2.7°C.

Kashmir is presently under the grip of 40-day long harshest period of winter, known locally as ‘Chillai Kalan, which started from December 21. It is followed by a 20-day long ‘Chillai Khurd’ and a 10-day-long ‘Chilla Bachha’.

Gulmarg had about 8cms of fresh snowfall during the time and recorded a low of minus 5.0°C against minus 6.0°C on previous night, he said. The temperature was 2.7°C above normal for this time of the year in the famous resort in north Kashmir’s Baramulla district.

Pahalgam, the famous resort in south Kashmir, had 4cms of snowfall and recorded a low of minus 0.6°C against minus 1.9°C last night, he said.

Qazigund, the gateway town of Kashmir, had 2mm of rainfall and recorded a low of 0.7°C against 1.3°C on the previous night, he said.

Kokernag, also in south Kashmir, also had 1.6mm of rain during the time and recorded a low of minus 0.1°C against 0.2°C on the previous night, the official said.

Kupwara town in north Kashmir received 3.4mm of rainfall during the time while as it recorded a low of 1.2°C , same as on the previous night, the official said.

Jammu, received 5.1mm of rains and recorded a low of 8.5°C against previous night’s 9.1°C which is 1.4°C above normal for the J&K’s winter capital during this time of the year, he said.