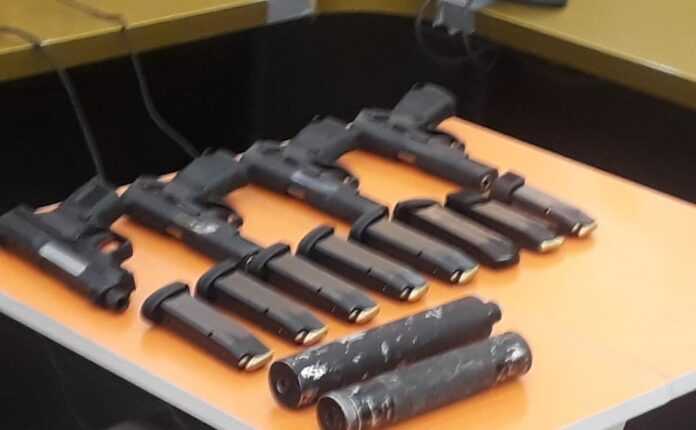 Srinagar: Jammu and Kashmir Police Thursday said to have busted a module it said was involved in killing of property dealer in Srinagar.

“On 22/12/2021 militants targeted and killed a property dealer namely Rauf Ahmed in Safakadal area. After the incident Srinagar Police started investigation into this killing. During the course of investigation movement of some suspects was detected in Srinagar City”, said a police spokesperson in a statement to GNS.

Identifying the arrested militants as, Suhail Qadir Khanday son of Ghulam Qadir Khanday, resident of Tral pulwama and Suhail Mushtaq Waza son of Mushtaq Ahmed Waza, a resident of Nikloora Pulwama, both active, the spokesperson further said during the searches 2 pistols along with two pistol magazines and 30 pistol bullets were recovered on spot.

“They further identified two associates namely Basit Bilal Makaya son of Bilal Ahmed Makaya, a resident of Qamar Abad Qamarwari and Naikoo Imad Nasar son of Farooq Ahmed Bhat, resident of Kiloora Shopian who were operating with them as OGWs”, the spokesperson said saying further that both associates have been arrested.

In this connection Case under FIR No 08/2021 of Saddar PS under sections 7/25 of the arms act and sections 18.23 of UAP Act has been registered in Police Station Saddar, the spokesperson said.

The spokesperson further said that “during the questioning, the arrested militants disclosed that they were operating in Srinagar City on the direction of one person namely Asif Maqbool Dar resident of MIG Colony Bemina, at present in Dhamam Saudi Arabia and Sajjad Gul, resident of HMT Parimpora at present in Pakistan.”

‘Both the handlers from Saudi Arabia and Pakistan were providing weapons and money through a network of OGWs being identified. This module has also done recce of security installations like NIA office, Delhi Police Headquarters etc. and shared the same with handlers in Pakistan.’

“As per the investigation the targets in the city for killings were also selected and conveyed to them by Dr Asif and Sajad Gul. Suhail Qadar Khandy was working in Saudi Arabia with Dr Asif Dar and in August 2021 on the direction of Dr Asif he came back and started working as an operative of TRF/MGH/for coordinating the collection of Arms/Ammunition, money and militant attacks in Srinagar”, the statement concludes.

Meanwhile IGP Kashmir Vijay Kumar has told GNS that, “There are already 3 more case FIRs registered against Dr Asif in Srinagar for using provocative language to invoke disaffection against the government establishments and promoting enmity between different groups”, adding it was for the first time that Dr Asif found directly involved in militancy in Kashmir.” (GNS)