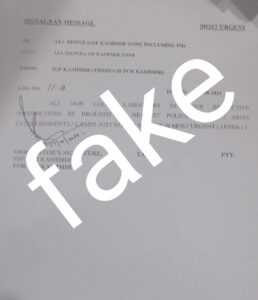 “There is no such order. It’s a fake one,” the IGP Kashmir told the news agency—Kashmir News Observer (KNO). An order that has gone viral on social media reads that all DIGs are impressed upon to take all non-local labourers to police stations and army camps. The order was circulated after the killing of two non-Kashmiri residents in South Kashmir’s Kulgam district—(KNO)

Teacher who managed entry in education department on fake documents 13...

Experts explain why there is sudden surge...